We invite you to combine unforgettable nature and adventure activities at Selva Bananito Lodge, one of the top ten eco lodges in the world,with un-comparable Scuba Diving exploring the most exciting dive sites, both, in Costa Rica and Panama, while supporting rain forest and marine conservation.

Our preferred dive locations on the Pacific are Isla del Caño, or Caño Island Wildlife Refuge, The Catalina Islands, about 7 miles of Flamingo Beach in the North Pacific of the country, as well as the Bat Islands, off the Santa Elena Peninsula protected by the Santa Rosa National Park. For more leisurely diving, the Gulf of Papagayo offers several interesting dive sites.

Conselvatur has extended its tourism program offer to include scuba & rain forest expeditions. These itineraries are meant to combine the most exhilarating dive sites in Costa Rica and also Panama, as well as to allow some time for rainforest adventure activities on main land Costa Rica, exploring virgin forests and thrilling white water rivers. The best scuba diving locations in Costa Rica are brought to you with the intention of being readily explored during these expeditions. The scuba diving tours are operated by the most professional dive centers in the country, and in the case of the Isla del Coco, we only use the best outfitter on the market, the Okeanos Aggressor.

Costa Rica is home to an incredible diversity of marine flora and fauna. All kinds of tropical fish and marine mammals find their home and their feeding grounds in a series of protected habitats, both, in the Pacific Ocean and the Caribbean Sea. These marine conservation areas include national parks and wildlife refuges which cover extensive protected marine areas that guarantee not only, the survival of many, even endangered, species, as well as, being an open invitation to seize the opportunity to discover all these exciting dive sites and to take home incredible scuba diving experiences and memories.

On the Caribbean Coast we like Gandoca Manzanillo Wildlife Refuge, particularly for the colorful corals and sponges as well as the many colorful coral fish. If visibility permits, the Cahuita National Park is a highlight for scuba diving, requiring different levels of experience and opening the doors to one of the healthiest reefs in all of the Caribbean. The great variety of tropical coral fish and schools of these displaying colorful beauty and grace is a feast for any divers eyes. If you prefer to go scuba diving in Bocas del Toro, Panama, we will certainly offer you unforgettable diving in this archipelago of stunning beauty as well.

The biggest treasure of marine life is to be found at Cocos Island, or Isla del Coco, 300 nautical miles south west of mainland Costa Rica. Cocos Island is a World Heritage Site or Biosphere Reserve and has a 12 nautical miles fishing exclusion zone for commercial and sport fishing around the perimeter of the island. The concentration of fish species, including many different kinds of sharks, is beyond comparison, and even though it is believed that a great pirate treasure was hidden on the island centuries ago, the real treasure of this island is to be found submerged underneath the ocean surface: the highest density of sharks on the planet!

If you dive with us at Cocos Island, words cannot begin to describe the rich marine life you will encounter: hundreds, if not thousands of white tipped reef sharks, hundreds of hammerhead sharks swimming slowly in large schools as to protect their off springs or “stopping at a cleaning station”, many silver tip sharks circling the dive site known as Silverado, black tipped sharks, galapagos sharks and occasional whale sharks. The density of sharks in the waters of Cocos Island has no equal anywhere on the planet.  Frequently sea turtles are seen, schools of marble rays, and eagle rays are the norm, manta rays, devils rays are very frequently seen. The amount of fish life is beyond description, as you will be swimming in the middle of schools numbering the thousands of different kind of jacks, for example.

As yellow tailed tuna fish and dolphins playfully gather to hunt for fish, it is quite normal to observe bait balls form as different sharks and marlins join in the feeding frenzy. Do not leave a night dive out of the agenda. The frantic search for food of the white tipped reef sharks after dark contrasts their easy going diurnal way of life. Too bad they do not like lobster, because, they exist by the thousands. As it is a marine park, we are not allowed to pick them either! How about the smaller fish: difficult to see but quite amusing are the red lipped bat fish and even more stunning is the rare frog fish, easily mistaken for a sponge. The fact is that there are garden eels by the thousands and so many moray eels, leopard eels that you will stop counting them after very few dives. The ongoing diver joke at Isla del Coco is when asked how many sharks you saw, you answer, “only one”.

At Cocos Island only advanced diving takes place, and nitrox diving is essential as the average depth seldom goes less than 90 to a 100 feet. Very strong and plankton rich currents are the source of the food chain, but also the biggest danger when diving Cocos: beware of the blue. 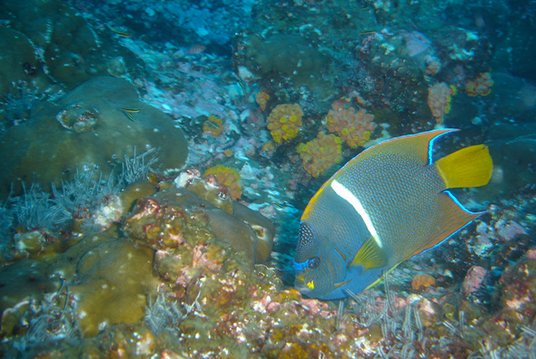 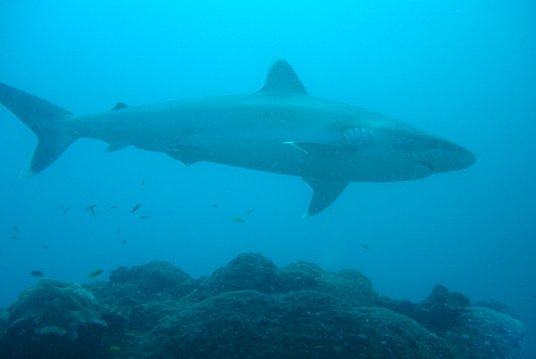 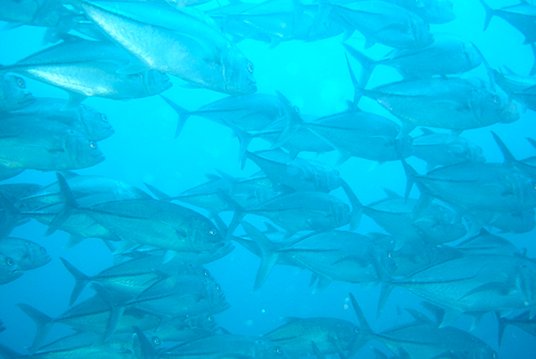